This photo of the Big Wood River in Ketchum, Idaho was taken in the beginning of March of this past winter. In a normal year, there would be at least a foot of snow along the banks, and more up on the slope. But we haven’t seen a ‘normal year’ in a while. The last three years of snowpack have been thin, and we have been getting more rain events in our winters. This year the Boulder Mountain Tour, a Nordic race that draws skiers from all around the country, was canceled—it rained all night on the lower half of the course and was still raining in the morning. 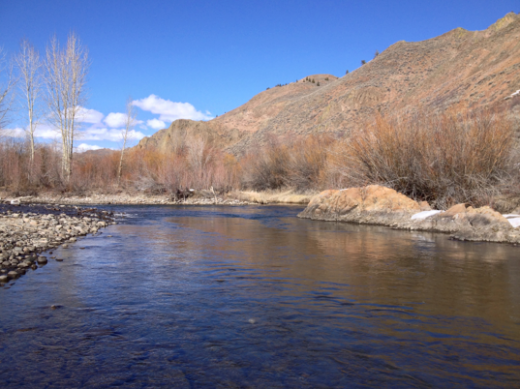 One cannot help but notice these events and wonder about next year, and the next. Walking my dog in the woods this winter I met a woman walking with her dog and we had a conversation about how our climate is changing. She pointed to the dry mountain in front of us and said, “We’re living it right now. We have to talk about it.”

The question is if it is climate change or a drought cycle? The last two years have been the warmest recorded winters in Idaho history. Climate scientists are predicting more rain events during our winters and snow packs are melting a month earlier in the West. This results in less snow accumulation, and that means less water storage for summer flows. The farmers can plant their alfalfa and barley earlier, but in peak summer, when they typically draw the most water, lower flows in the river may mean not enough water for all. We are fortunate to have a minimum stream flow on our river that will help protect the trout and wildlife. The Big Wood River is the lifeblood of our valley. Without our river, we don’t have a resort or a community.

The Department of Defense recognizes climate change to be a serious threat to our national security. Pope Francis addressed Congress on the subject of climate change and the need to protect the environment because to do so protects humanity. Yet others are quick to say that legislation to regulate carbon dioxide emissions would cost jobs. What about the adverse effects of climate change on economies that depend on fishing, skiing, recreation, farming, ranching, wineries, oyster farming and tourism to name a few?

Unfortunately, there is one group that won’t be lacking for work and that is our firefighters as they continue to risk their lives each season on the increasingly devastating fires that plague our western states. In 2013 the Beaver Creek Fire roared through the Sun Valley area, scorching roughly 135,000 acres. Heavy rains came later and the mudslides turned the river into chocolate pudding.

We experienced fish kills on Warm Springs Creek. Each significant rain causes the river to blow out. It was an unusually rainy August in 2013 that adversely affected the barley crop of our local farmers. I was guiding that summer and the smoke was heavy in the valley and unhealthy. The river was unfishable a good part of the summer and we sought out other watersheds to take our clients.  Two years later the fishing on the Big Wood continues to suffer. A combination of continued blowouts after rain, longer stretches of hot weather, lower water flows and sparse insect hatches made this guide season very tough. We just weren’t seeing the bigger fish and there were fewer smaller trout being caught and released.

By nature I am a positive person, so I hope we get good snow this winter. As the news reports on the severe drought in California and other regions continue to make headlines, maybe more of our politicians in Washington will finally wake up to the fact that we have to act quickly before it’s too late.  Be assured that Trout Unlimited will continue the fight to protect our coldwater fisheries.

Carmen Northen is a volunteer with the Hemingway Chapter of Trout Unlimited in Ketchum, Idaho.