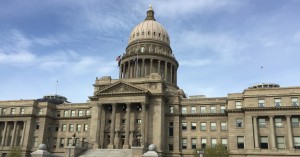 The second regular session of the Sixty-third Idaho Legislature called Sine Die in March after seventy-five legislative days.  As usual, attacks on clean water, public lands and the state’s fish and game agency were not in short supply.  Trout Unlimited and its conservation partners were kept busy from day one heading off a slew of bills attempting to expand small-scale suction dredge mining in the state, transfer federal land ownership to the state and politicize fish and game management.

Straight out of the gate, S1236 was introduced in Senate Resource and Environment by Senator Steve Bair (R-Blackfoot).  This bill would have mandated that the Idaho Fish and Wildlife Commission issue twelve Governor’s tags for trophy game species, removing the Commission’s discretion of using science and public input to make game management decisions.  A fundamental shift towards politicizing fish and game management in Idaho, this bill would run contrary to why the Commission was established over 75 years ago.  TU and a myriad of other sportsmen groups, with help from the Commission itself, sent a strong message to legislators that the bill was unacceptable. It never got a hearing in committee.

Next up, HB 510 was introduced in House Resource and Conservation by Representative Paul Shepherd (R-Riggins).  HB 510 would have drastically increased the scope and impact of what the bill defined as “small-scale” suction dredge mining while simultaneously deregulating the practice from any state oversight.  Increasing equipment size and eliminating horsepower restrictions, the bill would have allowed dredgers to move up to five cubic yards of sediment per hour.  HB 510’s Achilles heel was that the new statute attempted to remove small-scale dredging from the EPA’s list of point source pollutants.  After testimony from TU leaders, Idaho Department of Water Resources, the State Attorney General and others, the committee unanimously voted to return the bill to its sponsor.

Mid-session, a joint gathering of the House and Senate Resource Committees welcomed Utah Legislators and lawyers to present their legal theories on transferring federal lands to state ownership.  Trout Unlimited helped turn out over 300 sportsmen and women to the Capitol to voice their displeasure of such ideas.  Donning blaze-orange and camo, Idahoans opposed to this folly filled the Lincoln Auditorium to overflow, all wearing stickers saying “Keep your hands of my public lands.”  The successful rally seemed to put an end to the discussion of federal land transfer for the session but that was short lived. The Legislature’s tea party caucus, led by Senator Sheryl Nuxoll (R-Cottonwood) and Representative Judy Boyle (R-Midvale) had other plans.

SB 1338 was Nuxoll’s contribution, a bill that would allow County Commissioners or the County Sheriff to declare federal lands a public nuisance and demand abatement from federal agencies.   Using model language from the American Legislative Exchange Council, the Idaho Freedom Foundation cut and pasted the legislation into a draft bill, the first rendition so full of inconsistencies it was returned to the sponsor for corrections.  Unfortunately, the bill sailed through both houses on party line votes and now sits on the Governor’s desk to be signed into law.  Although the bill has no teeth, it could set the stage for endless litigation and undermines TU’s  long standing involvement with forest collaboratives around the state.

Representative Boyle then came forward with a trifecta of legislation opposing federal land ownership in the state of Idaho. HB 582 proposed changes to Idaho statute that would allow for transfer of federal lands to the state once pie in the sky lawsuits are successful.  Even with an Attorney General opinion stating that the bill “had no basis in law,” House Resources passed the bill out of committee on a party line vote.  Fortunately, Senate Resources never heard the bill and it died at the end of the session.  Boyle’s companion bill, HB 586, would have had immediate effects in Idaho by barring any new federal lands.  Land swaps, LWCF projects and federal purchases of private land would have become a thing of the past and the bill would have jeopardized transportation and energy infrastructure projects throughout the state.  Private property rights won the day, however, and testimony for the Idaho Association of Land Trusts, RMEF, BHA and others helped move the committee to vote the bill down. Boyle’s third piece of legislation, House Joint Memorial 14, supported Congressman Raul Labrador’s federal legislation setting up “pilot projects” of state managed federal land in the states, was also never heard by the Senate.

TU and its partners worked on a proactive public lands resolution during the session.  House Concurrent Resolution 53 was a reaction to efforts by private outfitting operations to lease state endowment lands for exclusive use.  The resolution supported equal access opportunities for all Idahoans and directed Idaho Department of lands to seek proactive solutions to keep access to state endowment lands for hunting, fishing, trapping and camping open in perpetuity.

Lastly, conservation easements came under fire during the final week of the session.  Idaho Department of Lands and Idaho Fish and Game budgets contained pass through money from the Forest Legacy Program and Pittman-Robertson money earmarked for a 13,000 acre easement on Stimson Timber Lands in North Idaho.  The property, slated for 1,200 trophy homes and a golf course only a decade ago, would remain working timber lands with public access to almost 10,000 acres under the easement agreement.  The line items were pulled from the budgets and debated separately.  Again Trout Unlimited and its partners were able to convince legislators that the conservation easement was a win-win for sportsmen and local jobs.  After a tight vote in both the House and Senate, HB 646 was passed and the easement saved.