Idaho’s Reed Gillespie Chapter is recipient of Embrace-A-Stream (EAS) funds to reduce riverbank erosion resulting from fishing pressure along an eight mile reach of the South Fork Salmon River.  In partnership with the US Forest Service, Idaho Fish and Game and Nez Perce Tribe, the Reed Gillespie chapter will create 12 fishing access rock stairs, rehabilitate eroded areas and educate river users on the importance of protecting the streambank areas from excessive erosion to safeguard the fishery.   The project will protect important salmon and steelhead spawning habitat from Poverty Flat downstream to the confluence with the East Fork South Fork Salmon River.

In 2008 Idaho Fish and Game opened up the South Fork Salmon River from Poverty Flat downstream to salmon fishing.  Since this stretch opened, its popularity amongst anglers has taken a toll on stream bank and riparian integrity.  The angler use varies according to how long fishing season is opened by Idaho Fish and Game (IDFG) but in a typical 20-day season, angler use in that section is estimated at 3,000 persons.

The Reed Gillespie Chapter contacted the Payette National Forest fisheries biologist  as well as Nez Perce watershed restoration manager two years ago to discuss this problem. At that time, both entities had several projects on their docket and could not dedicate time to resolving this issue.  This year, the partners are able to tackle this project together and involve others. 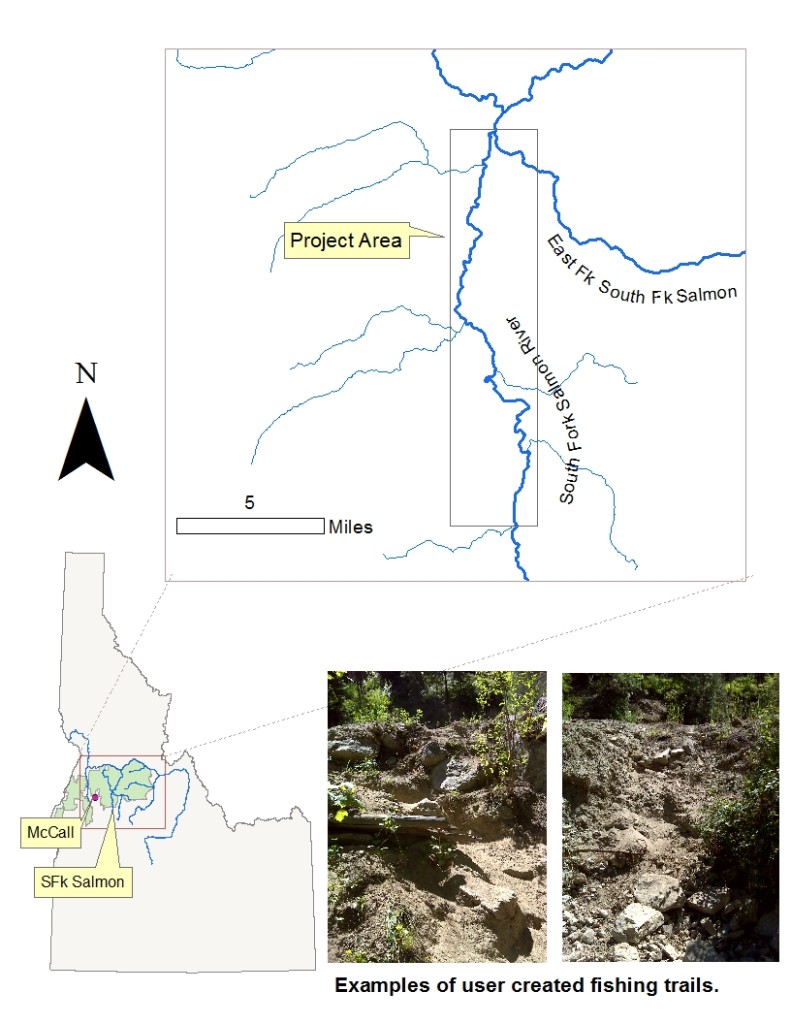 Reed Gillespie is a small chapter so enlisting partners, particularly partners with design and construction skill, is important to project success.  In addition to the Forest Service, Nez Perce Tribe, and Idaho Fish and Game, the project will also involve a Northwest Youth Corp crew and the McCall Outdoor Science School.

Twelve rock stairs will be constructed and 20 redundant user created trails eliminated in this area of the South Fork Salmon, and will help keep fishing access to the river available while minimizing the erosive pressure caused by social trails.

This project will also be used as an opportunity to educate anglers about the importance of not creating unnecessary trails while also providing them with the benefit of easier, safer, and better access to the river.  Access stairs will be placed in desirable locations and will be built out of native rock so that not only do the stairs blend into the environment but the required maintenance on them is low.  Information regarding the location and encouraged use of trails will be included in the joint USFS and IDFG salmon fishing information given out to anglers, temporary signage in the river corridor area during salmon season and flyers posted on porta-potty doors.