For the fifth year running Idaho Trout Unlimited presents the top ten stories affecting trout, salmon and steelhead and their watersheds in Idaho.   You can find the previous top ten here for 2012, 2011, 2010 and 2009. 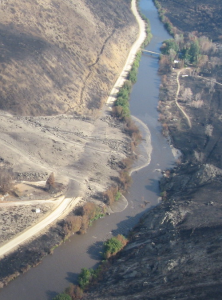 1. Wildfire and the after effects on blue ribbon trout streams.  In August 2013 the Pony and Elk Complex fires on the Boise National Forest and adjacent BLM lands burned across the lower South Fork of the Boise River.  The initial burn through the canyon and spotty along the riparian areas but a September 12 heavy rain storm led to massive landslides and flooding.  The website southforkboise.org chronicles the impacts of the fire and resultant mudslides, and the initial response of dozens of volunteers and government agency professionals to begin the recovery effort.  Meanwhile the Beaver Creek Fire near Ketchum had major effects on the Big Wood River and similar post-fire flooding and mudslides had its impact on the river.

2. The war on invasive lake trout continues in Yellowstone Lake, an initiative of the National Park Service, other government agencies, and a number of interest groups.  In 2013 the commercial-like fishing effort resulted in a slight increase in the numbers of lake trout caught but the effort to do it went up, and this is a good sign.  Meanwhile, there are efforts to suppress the lake trout population through killing the fish in the embryo stage using electrodes on the bottom of the lake in documented spawning areas.  The donations from fishing groups in 2012 towards the equipment used to track lake trout have proven very useful in identifying spawning areas.  More information on Yellowstone Lake efforts is available here.  Meanwhile the fishing efforts on Lake Pend Oreille have knocked back the lake trout population to where the kokanee salmon are beginning to rebound, as discussed here.

3. Silver Creek restoration project begins.  One of Idaho’s premier fly fishing streams is getting a major facelift with an aim to improve water temperatures.  The first phase of the project is underway and more information is available at the savesilvercreek.org website.

4. Federal Judge stops dredging plans on the North Fork Clearwater River.  Judge Robert Holt, with the U.S. Department of Interior, concluded that recreation opportunities like fishing and camping and the archaeological history along the North Fork of the Clearwater River deserve protection over the desires from miners who had filed at least 30 placer claims to mine gold from the stream.  This section of the North Fork of the Clearwater upstream of Dworshak Reservoir is in a safer place.  More information can be found here.

5. The salmon saga slogs along.  In September the Federal dam agencies released a new Biological Opinion.  It’s a lot like the previous ones, and the previous plans have been found wanting by Federal courts.  The last three BiOps have been found in violation of the Endangered Species Act and have been inadequate to protect and restore the Snake River salmon and steelhead runs.  This is nothing new as the litigation dates back twenty years.  In fact 2013 is the twenty year anniversary when the state of Idaho and Governor Cecil Andrus sued that the Federal government treatment of salmon violated the Endangered Species Act.  In 2014 we will commemorate the twenty year anniversary of Andrus winning that lawsuit.  Yes the new plan is like the old plans.  Yet there seems a glimmer of hope near end of this year as outlined in a recent report that the National Oceanic and Atmospheric Administration’s National Marine Fisheries Service (NOAA Fisheries) asked the Ruckelshaus Center – in partnership with Oregon Consensus at Portland State University – to conduct.  These parties completed a situation assessment of regional views about salmon and steelhead recovery planning in the Columbia River Basin over the long term.  And maybe in 2014 we can begin to see some progress on a roundtable to discuss recovery of the salmon and steelhead runs that migrate from Idaho to the Pacific Ocean and back.

6. The Upper Blackfoot River Initiative for Conservation completed projects on the upper Blackfoot River, including a fish population study. Then, through effective outreach, the partners worked with local irrigators to restore upstream fish passage and install fish screens at two irrigation diversions on Lanes and Diamond creeks.  The two diversion modifications include one on Diamond Creek and one on Lanes Creek, where the outgoing ditches on both diversions were screened.  New measurement weirs on outgoing ditches to aid landowners in measuring flow were installed.  This work opened up 25-30 miles of new upstream habitat.  The projects reconnect critical spawning and rearing habitat for native Yellowstone cutthroat trout in the Blackfoot watershed.

7. Discussion about a proposed National Monument for the White Clouds mountains took off in spring 2013 and many interest groups are weighing in with opinions.  To date the discussions have not emphasized the fishery values in the area, one that contains the headwaters of the main Salmon River, the East Fork of the Salmon and the Big Wood River.  While the debate and discussion of National Monument designation unfolds in 2014 it is worth noting that stream restoration work has moved forward in this area, for example the reconnection of portions of Pole Creek, and more opportunities exist in these watersheds.  One question worth exploring in 2014 is how National Monument designation could help or hinder fishery restoration work in the area?

8. The Big Wood Home Rivers Initiative seeks to take advantage of a supportive local angling community and our long history of restoration success to restore the full wild trout potential of the Big Wood.  Our objective is to both restore fish populations and the habitat they need, and to educate landowners that live along the banks of the river and its tributaries about how to protect and steward those unique resources.  Home Rivers Initiatives are national programs that place a full-time staff member in a watershed to live and work with and within the local community and bring TU’s scientific, policy, grassroots and legal expertise to bear on watershed- scale restoration and protection.

As is common to all of TU’s conservation work we do not hope to accomplish our goals alone.  The list of project partners is long and growing. These partners in the Wood River Valley include; Idaho Fish and Game, The Nature Conservancy, The Wood River Land Trust, Hemingway Chapter of TU , Silver Creek Outfitters, private landowners and Idaho  Department of Water Resources .

9.  The Owyhee Basin Redband Trout Restoration project is working to  ensure that this special river provides redband populations with the necessary protections so that they continue to persist in the Owyhee Basin as the climate changes.  Trout Unlimited’s Science Team recently assessed  the habitat and vegetation across the Owyhee Basin, which  identifies places where fish need the most help and where TU can apply its expertise to restore these areas. We’re using that analysis to do on-the-ground restoration to protect these fish so that they can move within the river and establish themselves and remain viable. Working with federal and state agencies and private landowners, TU is focusing on protecting coldwater springs, which provide important summer refuge areas for redband trout. We’re also planting native plants and keeping livestock out of streams to improve river conditions. We’re also helping to rejoin areas of the river so isolated redband populations can have improved access to habitat.

10.  Lower Boise River restoration initiative will benefit from the announced funding of a grant to the Ted Trueblood Chapter and other organizations to establish the Boise River Enhancement Network.  This network will build on the work done to date where the Ted Trueblood Chapter has pioneered working with landowners along the lower Boise River to improve aquatic habitat to improve the unique urban fishery in Idaho’s highest populated area.  More information is available at the Boise River Enhancement Network website.