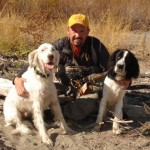 Chad Chorney, a longtime Magic Valley Fly Fishers volunteer and Trout Unlimited staffer, was awarded Fly Fisherman of the Year by the Twin Falls chapter at their annual banquet on Saturday Feb. 9.

Ben Collins, emcee for the evening, summed up Chad’s accomplishments like this:

“This individual is a firm believer of conservation and education through fly fishing. He joined Magic Valley Fly Fishers several years ago and brought with him an in depth experience in fly fishing, fly tying, fly casting and a willingness to participate in all the club’s activities and even more important, a willingness to become a leader and eventually serve as newsletter editor and then as president for two years. He also took on the onerous task of banquette chairman for two years and was always instrumental in any conservation projects the club worked on.

The only problem, he wasn’t an Idaho native and you know how that plays out in this state. However, he went to work under the tutelage of Dave Anderson who soon had him molded into an “almost” Idaho native.

Then he found a higher calling and went to work for Trout Unlimited where he could really put his fly fishing and leadership qualities to work improving trout waters in the state and lately, he raised his sights another notch and combined his fly fishing with photography.”

Chad has another success on the river.

Congratulations to Chad and to the Magic Valley Fly Fishers on a successful banquette and another year of working to protect, restore, reconnect and sustain coldwater fisheries in Idaho.